Get fresh music recommendations delivered to your inbox every Friday.
We've updated our Terms of Use. You can review the changes here.

from The Wrath of Con by Possible Oscar 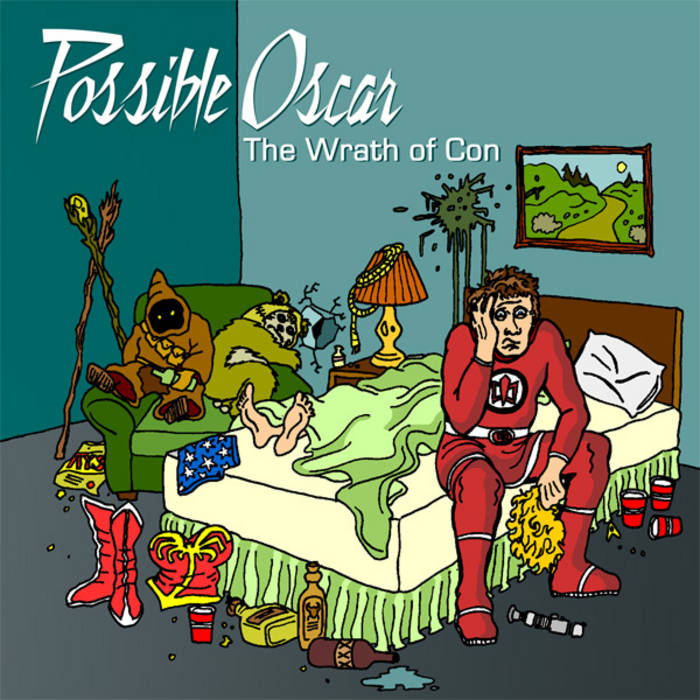 A parody of "Burn Hollywood Burn" by Public Enemy about the failures of Hollywood.

WYNGARDE: Have you seen the latest box office numbers?

LUKE SKI: Our revenue has been trending down for years now.

BUD: It certainly isn’t the quality of our product.

DEVO SPICE: Piracy is killing us.

LUKE SKI: So how do we reverse the trend?

WYNGARDE: Seriously though, We should continue to make movies that feel familiar and appeal to the broadest possible audience. Any suggestions?

Earn Hollywood earn our revenue is going down
Need a hit that will not bomb
So let’s remake a movie
Update a classic film just to prove we
Can take an old idea and just revise
The plot and characters how we like
Cause all we care about is not selling out
And front-loading the box office roll out
So we’d never stick our necks out
On films no test audience checked out
Hollywood or wood chuck wood
How much would you chuck just to make a buck
But some films we’ll never remake (haha)
There’s no limit to what we’ll take
For all the years we worked so hard
The work is over, time to steal with no regard

That film is due for a sequel
Just flip the script a bit and it’ll do well
A fresh idea would be unwise
We’ll make two or three and create a franchise
Similar plot and cast would be safe
Tell the same story in a different place
Blockbuster box office just like the other
Don’t mind the critics (*cha-ching*) another buck, er…

As I channel surf from Nick at Nite to TV Land
Thinkin’ how hard can it be to adapt
One of these classic TV shows
Of Darrens or Ralphs, Lukes and Bos
Many would pay and cheer with glee
To see their favorite show up on the screen
All you really need to do is change thing or two
Shoot the whole thing like a damn music video
And old actors of shows adapted
As for playin’ the lead part, not gonna happen
For what they play cameo is the perfect role
Even if since they’ve gotten old
So let’s steal some ideas from old works
Seems the best way to keep jobs and perks
There’s nothing that we can’t regurgitate to earn
Earn Hollywood earn

WYNGARDE: Now we’re considering you to take part in the writing of our next film. How do feel about writing situational comedy?

BUD: Hey, hey, hey, We need to brainstorm ideas for our next feature. What do you got?

LUKE SKI: I think we should return Blue Thunder to the big screen

DEVO SPICE: What about Apocalypse Later?

LUKE SKI: I know, we can update Dr. Strangelove and cast Steve Martin!

BUD: Knot’s Landing could be a feature. Keep the 80s style and sensibilities and juxtapose them with the modern world!